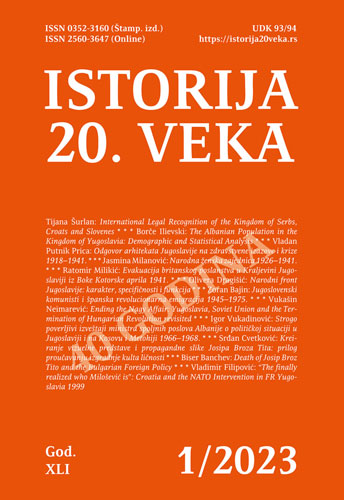 Journal Istorija 20.veka (History of the 20th Century) is continually published by the Institute for Contemporary History twice a year from 1983. Journal considers previously unpublished manuscripts of articles and scholarly contributions whose object is contemporary history of Serbia, former Yugoslavia and the Balkans in European and global context. Articles are expected to be interdisciplinary, based on original archival researches. Journal publishes articles that critically investigate social, cultural, economic and intellectual developments of 20th century. All received manuscripts are a subject to a double-blind external peer review process. In order to be accepted the manuscripts need to be deemed publishable by the editorial board and two anonymous reviewers. Articles are published in Serbian and English, and in other languages should the need arise.

Journal is included in SCOPUS (in 2021, according to SJR, has a Q1 ranking), ERIH PLUS index (European Reference Index for the Humanities and Social Sciences), Central and Eastern European Online Library (CEEOL) and Directory of Open Access Journals (DOAJ). According to the categorization of the Ministry of Education, Science and Technological Development of the Republic of Serbia, since 2021 it carries the category “International Journal (M23)“. History of the 20th Century is an Open Access Journal.

Authors should send their articles on email address casopis@isi.co.rs and must adhere to the technical instructions for the preparation of the text, the Chicago style citation and ethical principles of publishing works. Otherwise, the article will be rejected or withdrawn subsequently.